A Week in Winter

Sample
A Week in Winter

Stoneybridge is a small town on the west coast of Ireland where all the families know one another. When Chicky Starr decides to take an old, decaying mansion set high on the cliffs overlooking the...

Stoneybridge is a small town on the west coast of Ireland where all the families know one another. When Chicky Starr decides to take an old, decaying mansion set high on the cliffs overlooking the... 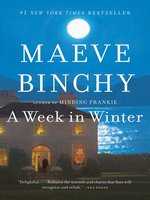 A Week in Winter
Maeve Binchy

A Week in Winter
Maeve Binchy
A portion of your purchase goes to support your digital library.